Disneyland of the Gods 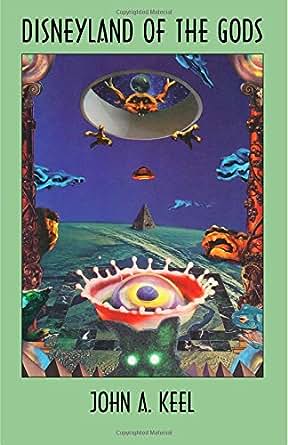 Just some notes, to see if this will fly without being too much work...

(update: It is too much work but your correspondent shall persevere...)

This book is a collection of articles by Keel from Saga magazine (a "men's" magazine I believe) which appeared around 1970. Dated? They don't read that way. Keel investigated many cases in the field, collected hundreds if not thousands of newspaper clippings, and corresponded tirelessly with others in the field as well as numerous contactees.

Most of his collected articles read like summaries of all this information.

One thing I like about his reporting is that he eschews the use of hypnotic regression; in fact, he thinks anything revealed by hypnosis is unreliable and may just be the subconscious inventing a story to please the hypnotist. He documents elsewhere in his work several instances of a random person being hypnotized and told they were abducted by aliens, and upon being woken up spinning a whole abduction scenario out of the blue. And believing it. His other example is a CBS TV show where a technician was hypnotized and told CBS was conspiring to take over the world. Upon being snapped out of it he launched into a story about it, believing every word.

Keel only used what the contactees could consciously remember, and did not reveal to other contactees what they said. That way he was able to compare all their stories and find similarities & draw some conclusions about the flying saucer/ abduction scene.

Now on to some notes:

p14 - Fafrotskies; Keel is talking about Charles Fort & things falling from the sky at random, like chunks of ice.

Last year (2018) a chunk of ice hit a house in Chino, went through the roof of the garage if I remember it right. I wanted to go to the guy's house and ask to see some of the ice, but I never did. Not very intrepid reporting on the part of our correspondent. It's sposed to fall from airplanes but airline people will tell you it couldn't happen.

Yes - there aren't any. See Paul LaViolette's Genesis of the Cosmos, Earth Under Fire and Secrets of Anti-Gravity Propulsion where he shoots down, successfully in my view, the black hole and big bang theories. Those theories are so full of holes... Seems like atheists going to any length necessary to prove the universe is entirely mechanical and that there is no God, and their theories keep getting more and more convoluted as more data comes in, in order to fit the facts into their theory. How about the universe that is supposed to be only 14 billion years old and yet the latest galaxies discovered by our space based telescopes are 92 billion years away (in light-years). Does that make sense? Fook no.

The center of our galaxy isn't a black hole, it's the opposite. It doesn't draw in matter & energy into a singularity, it periodically explodes, creating matter. See LaV's theories on galactic superwaves. One is on the way. Are we prepared? Not even.

p17 - Author says Fort says the future somehow controls the present and past and not vice versa. See Robert Schoch's Forgotten Civilizations where he says the same thing, based on studies conducted by a professor on his students, where he had them study randomly picked words after having already taken the test, and finding out they did significantly better on the test, even though it had already been taken!

The future reaching back to affect the past; in this case, as long as you haven't seen your score or grade yet. Far fetched? Apparently not.

This fellow developed a "miracle motor" which ran on its own without an outside power source or fuel. Must investigate. This is the same year Townsend Brown filed the patent for his electrogravitics devices. Hmm... Both inventions disappeared. Hmm... The latter was apparently immediately classified by the US government so no one in the private sector could work on it. The former... never heard of it or the inventor.

Learning through LaV's book about Brown's work totally changed my conception of ET's. There aren't any! There are no aliens with their "superior technology" flying around in our skies and abducting people. Any machines seen in the air, and there are some, are products of human beings. Which humans is the question.

No aliens people! You are being stupefied. But more of that elsewhere...

p41 - In 1953 (year of my birth, hmm...) an unknown satellite was spotted orbiting Earth. This is 4 years before Sputnik. In 1957 an object was photographed following Sputnik II. Weird. Must investigate further.

Also "The Black Knight" in 1960, circling the globe in a polar orbit. No nation had successfully put a satellite in polar orbit up to that time. It was estimated at 15 tons. Reported by New York Times, Newsweek, Life. Oops, maybe there are aliens. Or secret technology way ahead of what the public is allowed to know.

Long Delayed Echoes, bounced back from space. From the 1920's. Lunan plotted the data on a graph and it made a map of the constellation Bootes. He guesses these signals were coming from the mystery satellite (unsure about this), Bootes is where they would have been from. In theory. Except that his map showed Bootes in the position it was in 13000 years ago. That's right around the end of the ice age... That's when this mystery satellite might have been put in place...

Where is this satellite now? Why have I never heard of it before? Is it that unimportant? Or was it just a weird temporary asteroid that later burned up...

In other words during periods of magnetic activity, flying saucers are seen. Are they always there but just become visible at this time to certain people (psychics probably)?

Look up Project GARP, a 1974 study of the atmosphere and magnetic field.

Look up Dick Tracy comic strip, author says for years it contained an "incongruous little box" that said "The nation that rules magnetism will rule the universe." Which brings us to Ed Leedskalnin and the Coral Castle in Florida, and how this little guy built it all by himself. More on him in another post, along with the short book by RL Poole who seems to have found the answer, decoding the clues left by Leedskalnin.

p93 - Idaho Triangle? - weird stretch of 10 miles along I-15 in Idaho where people inexplicably drive off the road for no reason. Between Incom and McCammon. Next time you're on vacation in that area, take note.

Update: I was in this area a few months ago (Oct 2019) but didn't have the time to detour to this spot. A glance at the map shows there's a state park here along this stretch of I-15 called Indian Rocks. Coincidence? Magnetic anomaly? Native American hocus pocus?

p103 - author mentions John Fuller's book on Betty & Barney Hill, says that he left out some important details that tend to discredit their abduction story. Those tapes were all made under hypnosis. Keel presumably has heard those tapes. After Fuller's book appeared many other victims came out of the woodwork. Someone from somewhere merely studying us. No? "There is really much more to it. Much more." -Keel yeah it's a fake story concocted by the humans (military ops or CIA or whoever) who did it & used hypnosis to implant the bogus aliens stuff. The Hills saw military uniforms.

The mantra of the New Age channeling of supposed superior alien intelligences. What a crock. So if we are one I guess we're supposed to abandon our individuality and join the group mind. Follow the crowd. Follow what's trending. Do what you're told. Stop thinking for yourself. The benevolent aliens will save us. Sheesus. This "we are one" crap has been going on for over 50 years! The elves were probably saying that to our ancestors in the middle ages.

p125 - Moodus Sounds, East Haddam, Conn. - area called Morehemoodus by the Indians - strange explosions still heard occasionally even nowadays. Story of a brilliantly luminous rock found in the same area by a European named Steele, who took it off to Europe and was never heard of again.

p131 - The whole chapter on hybrids and sleepers...

Scary stuff. Discusses how people can be hypnotized and later triggered into doing things without having any conscious memory of it. Also discusses how real events of supposed alien abduction can be buried underneath planted abduction scenarios, and how therapists in recovering the planted scenario totally bury what really happened. Keel suggests that the CIA may have studied the abduction phenomenon and learned how to use it. I suggest that the CIA (or others of their ilk) have been doing it all along, creating the modern abduction scenario to set up a false belief in ET's. For what purpose you ask? Maybe to stage a fake alien invasion at some point in the future, to unite us all into a world government to combat the threat, when really all it will do is install a world dictatorship.

Layne called the saucer people Etherians. In 1949. He had already dismissed the ET hypothesis. Keel compares ufos to psychic phenomena & says they're basically the same. Mentions Allan Greenfield. See Cipher of the UFOnauts for a scarier psychic/occult explanation for what's going on. Not into the occult explanation myself, I hope that's not what's really happening. The ET hypothesis is a cover for something else, that's for sure.

"Visitors from outer space are trying to work out a method of breathing and staying alive in our atmosphere before landing and establishing contact."

Keel then goes into how witnesses say MIB seem out of breath and stagger around like they have the bends, mentioning the symptoms, particularly vertigo and nystagmus. Too much nitrogen in the atmosphere. Smell of hydrogen sulfide (rotten eggs) is common in ufo encounters. If that's part of their atmosphere, the most common place where hydrogen sulfide is found is the center of the earth. Asian belief in King of the World, ruling the world from underground, the Shaver Mystery and the deros... Wha....

p174 - one last quote from the author after 5 brilliant articles that close out the book:

"Illiteracy is rising so fast it can hardly be measured. People who can't read are, of course, cut off from the past, from history, from the thoughts and perceptions of great minds, from art and culture, from everything that has any meaning. The loss is staggering. We are becoming a race of animals living only for the immediate moment, with no vocabularies, speaking in grunts and guttural noises like the cavemen."