The Coming of the Guardians

This title initially appeared in 1956 but the bulk of the info comes from the previous decade. The theory of the Etherians was first proposed in 1946 apparently; one year before all the big saucer sightings started. Hmm... 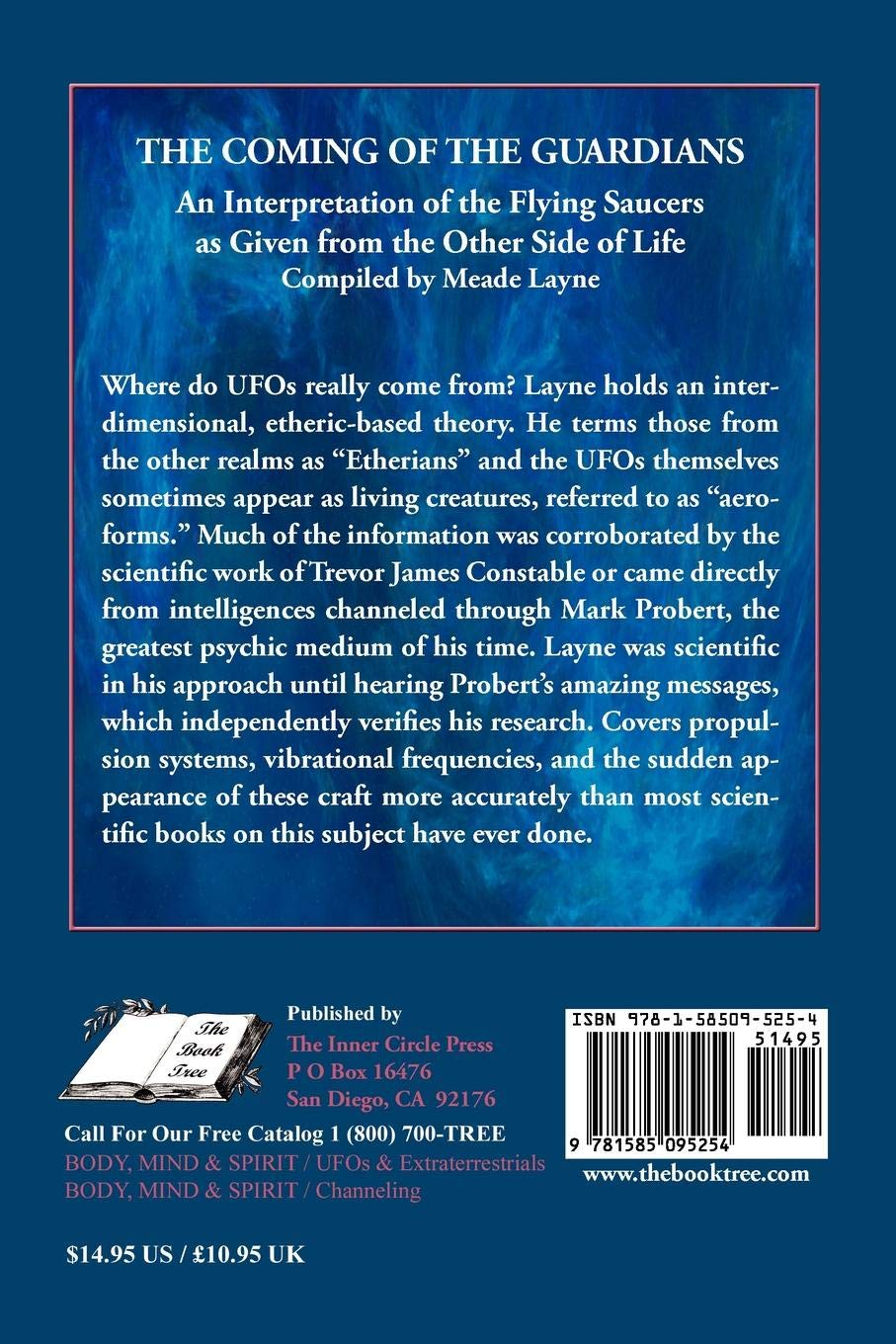 Material worlds of denser form are all around us; in the spaces or gaps between & within atoms. Author uses example of block of lead compressed to tiny size, even to the point of being invisible, yet still having plenty of free space amongst the atoms. The ufos would emerge from these worlds within the gaps. Overlap, as one of my friends has said.

This matter of density... The controls channeled by Mark Probert (the supposed Inner Circle of ascended humans, masters or whatever) say that these other worlds are more dense than ours, not less. Contained within our world I guess. This is contradictory to everything else I've read that says earth is the most dense; our own frequency level or vibration is the most dense & we must ascend out of it. However if these other unseen worlds are already more dense than we are, what will be ascending into... It might be just semantics; ascension to a higher frequency would be an increase in density not a decrease. This doesn't seem to jibe with other stuff I've read though...

Another author in a brief glimpse at a list of similar books (Pinchbeck maybe?) says we are imprisoned in this frequency (PKD's Black Iron Prison?) & must break out of it (I dunno if he mentions ascension or not, too many books to read already, don't need another one yet of this variety). Again we get back to the schuman resonance. We can't break out of it unless earth's dimensions change. Or the height of the ionosphere changes. HAARP is supposedly shooting beams of energy into the ionosphere, for tests or controlling the weather or whatever sinister things they're doing - not just HAARP but 7 or 8 other countries around the world too - so if we're imprisoned in this frequency maybe HAARP will break us out of it by pushing the ionosphere further out. Is that what they're really trying to do? HAARP is the good guys then? I somehow don't think so. Our astronauts in the space station need the schuman resonance (7.83 hz) artificially played, or they don't function well - details I'm not sure, must investigate one of these days - so breaking out of the schuman resonance into whatever may not be such a good idea... Once we do it & it's bad, too late to go back... So HAARP is trying to change the schuman resonance to make us all more susceptible to control. Although I did read somewhere later on that HAARP has been shut down since 2015, not sure if that's true tho...

One has to wonder if all the saucer biz was hurriedly begun to discredit this avenue of thinking... After at least 2 decades of tests (Townsend Brown electrogravitics patent in 1928 - immediately classified) a group of remote controlled ships is flown & seen by Kenneth Arnold. That same year a ship is deliberately crashed in Roswell, with dummy aliens aboard that peeps are given brief glimpses of. The whole ET scenario is being set up but so far it hasn't been good enough because channeled communications are still coming through that discredit the ET thing (in favor of Etherians who aren't from outer space or other planets at all). So someone has to come along and actually meet some living aliens & ride in a spaceship. Thus Mr. Adamski (and Daniel Fry & T Betherum) - who seems sincere in his beliefs but in actuality has been deluded and used by the CIA or whoever.

p5 - "Empty space is not even an idea, but merely a vocal sound to replace thinking." Brilliant!

p6 - Frequency of resonance = square root of (pressure divided by [K times sq. root of mass-density]). Got that? K is a constant "that may depend on the material substance saturated with the ether." Not sure what that means, but need to find out.

Frequency depends on the inverse sq. root of mass-density of the ether itself. Umm....

Etheric matter can be "tuned in," and here and there are matters of frequencies, densities, wave lengths - not of spacial position in 3-D.

Layne's ps in 1957 says this is "now widely believed." Maybe then, but soon afterwards it wasn't. This view has been suppressed at every turn in favor of the ET "superior technology from another planet" hypothesis. 20 years later Keel revives this theory - and again is suppressed. He gives due credit to Layne. Vallee follows 10 years later; also not widely believed.

Ufos materialize just like stuff in a seance; which has been fully documented BTW (the seances that is).

Layne in 1957 - "Their purpose seems to be regulatory action" - possibly concerning planetary affairs & seismic conditions. Seismic conditions in 2019 are way worse than they were then; lots of 7.0 earthquakes around the world. Planetary affairs? I dunno if they're better or worse. More polarized. So if it's regulatory action, they're dismal failures.

p25 - Mentions Adamski & Williamson & spacemen - says they can be temporarily appearing as solid beings - just like the saucers. Not sure I buy that. I think they're normal humans in disguise.

p35 - There'll be a great earthquake, earth's magnetic field will be disrupted, great land masses will be displaced... In a few years, it will not be many years. Hmm... This was 1947 it's now over 70 years later, that's more than a "few years" although Tim Wyllie probably saved us with his thoughts & his crystals. Heh. DC's Nostradamus contacts said the same thing - as do others I haven't read yet, I suppose.

p47 - Our demonic playmates are urging destructive ways - entities on the lower astral plane. Plus confirmation of deros using machines in the caverns left by the Elder Race. Okay... Latter is later debunked by one of the others. However, demonic playmates is probably what's really going on.

p61 - Master pulse wave - beamed from the moon (okay...), a mechanism that allows them to lock into synchronism with our plane/vibration/frequency/expression or whatever hell else they call it. Sounds like confirmation of the schuman resonance, which wasn't known at this time. Is that what they synch into?

They can cut out the mechanism at any time & assume control of their own vibrational frequency. This is what ascension would theoretically be, however without the schu res humans might be subject to the same problems as our astronauts, as any of these saucer riders going to other planets should have been; possibly amnesia and other mental & physical disorders...

p65 - ...which leads to paragraph #2 where Adamski is thrown under the bus, saying he could not have flown in outer space without time for necessary conditioning; without having his mental faculties impaired. Confirmation of the schu res, before we were aware it existed.

Simple. He didn't fly into outer space or make it up; he was either confabulated or did ride in a scout ship made on earth (by CIA or whoever) & was shown videos out the "portholes" - as some have said, like Colvin I think.