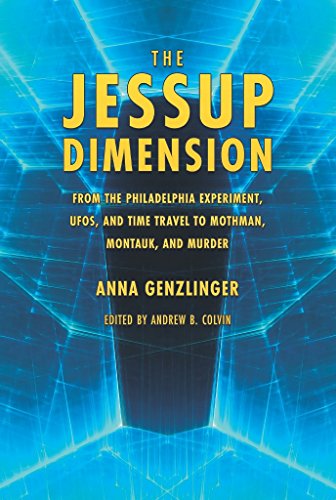 p13 - Barker unwittingly propagates questionable time travel theories of Sherwood posing as physicist Pratt - so says Peter Moon in the new intro. Barker questions those theories himself though, at least in the Swamp Gas book later on.

p54 - Only Bill Moore identified photos of body as being Jessup. Isn't that a red flag, knowing that Moore worked with the CIA & assisted in destroying Paul Bennewitz & invented MJ-12? I'm surprised this info isn't in any of the other Jessup books.

p79 - Binary code language transmitted by electronic signal - to program - via tv, radio etc. Inaudible, below range of hearing. (This is illegal but doesn't mean it won't be used). To hypnotize & give commands etc.

Via memes etc there's an effort to distract public away from older cases to promote the ET hypothesis. Yup! Is this an effort by the intelligence services or a somewhat naively honest mistake by the new legions of atheists whose worldview would come crashing down if ufos were proved to be supernatural or occult in nature. The atheist-materialist couldn't handle it.

p88 - Phil Schneider also suicided like Jessup, in 1996. Maybe to promote "false" Philadelphia Experiment story. Keel thought the Phil Exp probably never happened. So all the Montauk stuff would be fake programmed "memories" in order to... what? Get a few peeps to believe it, for what? Why all the effort when 99.9% of peeps will never even hear of it in the first place?

p92 - Non-conservation of energy; Marinov was strong believer. Maybe this is the big secret after all: free energy; they know about it, know how it works, use it, & don't want us to have it. "Law" of conservation of energy is a bunch of baloney; like the big bang, expanding universe etc etc.

p107 - Alien abductions are CIA mind-control operations, according to 90's researchers like Cannon, Constantine, Emery, Judge, etc. Of course Keel had already figured this out 20 years earlier & was probably amused at all these "noobs" "finding out" stuff he had already written about years before. Not to take anything away from these newer researchers, good on you.

p109 - Hopkins tries to derail Strieber when the latter talks at meetings about psychic aspects of abductions; Hopkins tells him to get back to ET's. Both were named by William Cooper as CIA, so this kinda doesn't make sense; unless Hopkins is reminding the other guy what their story is supposed to be about. Keel also said Hopkins was CIA; a plant to promote the fake ET story obviously. Hopkins claims in Sight Unseen or whatever that book is called (yes I read it & stupidly believed it at the time) that 1 out of every 10 people in the world has been abducted. Rolls eyes...

p112 - Montauk. Fact? Fiction? Writer Gorightly thinks there might be some truth to it. Maybe, with the rest of the far out time travel & so forth crap added to disguise whatever small bits might be true. It goes beyond science fiction - in other words, past the point of believability. Yup.