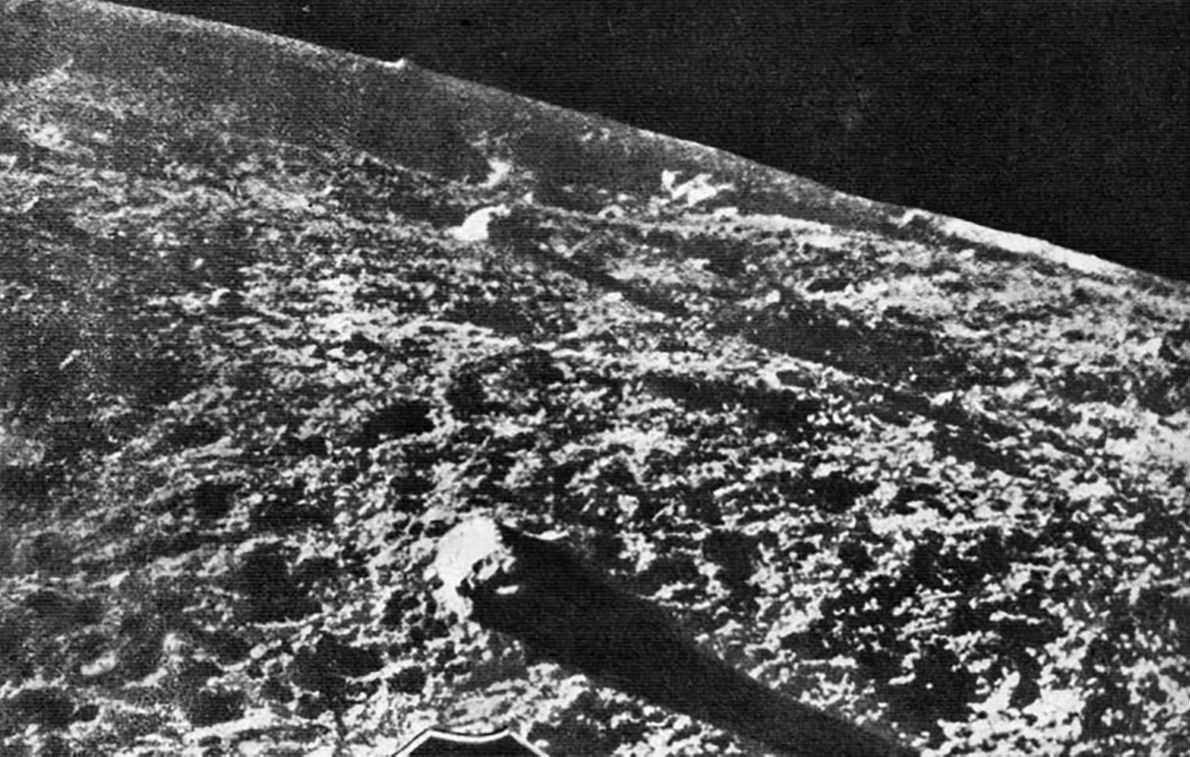 Above is Luna-9 pic, first image of the lunar surface. What is that thing in the foreground casting that long shadow? Not sure if the one above is Luna-9 or not, it said it was.

Google search will turn up pics of Luna-13 with "alien artifacts" as well as many other weirdo anomalies.

p30 - Woodpecker signal standing waves from the USSR stretched down both coasts of the USA in the early '70's & is blamed for causing weather change & drought due to altering the trade winds. You dolt, it's carbon emissions haha.

p31 - Brainwaves of entire populations can be altered & entrained by use of microwaves according to Army report. I dunno, the schuman resonance is what the brain is acclimatized to. Maybe they think they can control entire populations but they haven't succeeded yet, although HAARP might still be trying by beaming microwaves at the ionosphere & trying to push it away; maybe to alter the schuman resonance & make us vulnerable. Mass mind control has simply not happened, in spite of what these alarmists have written. To a more limited extent, maybe, yes. Mind control through puppet media (the power of suggestion) especially TV and possibly internet & video games etc. & through supposed ufo sightings that put people in trances.

p32 - The French use sound waves to control crowds; their sirens use additional inaudible sounds that cause terror & loss of bowel control. In everyone who hears it. Yikes. Let's hear it for socialism! In the US it's supposed to be illegal to use inaudible sounds, but who would know? Not illegal to use masked sounds, as I've speculated is the purpose of all these noisy shows with constant loud cheering like The Voice etc etc. They can hide something in amidst all the frenzied cheering for the latest below-average amateur performer. Maybe coronavirus has killed all those shows, not to mention the decades of stupid dance videos. We can only hope... How about getting back to real music that we must listen to instead of watch... Could it happen? Nah they'll find a way...

Scientists comprise much of the vanguard of totalitarianism. -FA Hayak in 1944. (!!)

p39 - Bowart defends Dianetics - says it proclaims increasing mental liberty while exposing the techniques used by mind controllers to create slaves, & even provides antidotes to it. Which is why Hubbard was persecuted by the govt. He had perhaps blown the whistle on the cryptocracy's whole plan. ?? Do I now need to research Dianetics amongst everything else? Sheesh...

p40 - Suggestibility is the first step of surrender to mind control. Is this what the ufos are able to detect with their ability to see beyond our visible spectrum, in our auras that Keel says they can see, as some psychics also claim they can see. Evil peeps have blackish auras, good guys gold, most are blue... What would tip them off to someone's suggestibility? Whatever it is, whatever they are (some human, some not so human...) they can see it.

p41 - The CIA has a microchip they can inject into the bloodstream which delivers it to the brain where it lodges & holds. A biomedical telemetry chip. With which they can presumably use to give you instructions... Scary.

p52 - Paranoid schizophrenics are almost impossible to hypnotize. Sirhan Sirhan is the example used. Because he was easy to hypnotize proves he wasn't psychotic. He practiced self-hypnosis in prison which requires great self control, which no schizophrenic has. How does this compare to witnesses who see ufos & seem to be put in a trance? None of them are demented either then. They would all have to be sane normal individuals (which all accounts happen to show is the case). Or whatever factors make a person vulnerable & susceptible.

p65 - SDI was a cover story for ELF mind control programs. The author does the obligatory blast against Reagan but then his example is from 1978 in Eugene OR where mysterious radio signals caused fatigue, headaches, anxiety etc. Jimmy Carter was president in 1978 I think, not Reagan.

p70 - People are inept at hypnosis so they will pollute others with false memories. -Bowart. Yup that's the whole game behind the alien abduction scenario. See Prisoner of Infinity for support.

p74 - In university settings - a-holes abusing their own children - the highest levels of intellectuals, the cream of the crop in ivory tower academia. Bowart doesn't identify these scum but academia is pretty much an exclusive club of one side of the aisle, no? The cream of the crop... Not!

p110 - Constantine trashes Cannon (sounds like the latter deserved it).

p156 - The shape of a pyramid preserves, dessicates, & sterilizes organic matter. Hmm... Pyramid Power book had just come out. It's in storage or I'd double-check. Live in a pyramid to protect yourself from coronovirus?