Man & His Becoming According to the Vedanta 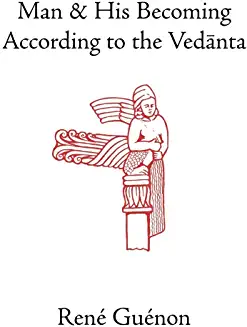 "Guenon held that Hinduism embraces the most ancient, profound, and comprehensive expression of traditional metaphysics we possess, which can in some ways function as a key to every other traditional form, and this work has been called the first reliable exposition of Hindu metaphysics in any Western language."

p11 Karma means action in all its forms, as well as ritual action. Nothing to do with what the word has come to mean nowadays, which is a modern invention as I've said elsewhere.

p12 According to the Veda there are 7 beings endowed with longevity, whose existence is not confined to any particular epoch. Similar to Taoism that speaks of "eight immortals." Hmm, this couldn't be an allusion to the planets, could it? The seven known or acknowledged at that time.

p13 The Upanishads represent the primordial and fundamental tradition, and constitute the Vedanta in its essence. Not just "stories" or "legends" or "myths."

p14 Sound holds the primordial rank among sensible qualities. We hear many octaves of sound; we see only one octave of color.

p24 Personality - the supreme self - it abides ever the same through all degrees of existence. So we are who we are, forever. Dang it, I thought I was King Arthur in a past life. Sigh...

p26 The personality belongs essentially to the universal order.

Certain states of manifestation are formless. Hmm. We met some of them on Star Trek. And Melvar on Futurama. Heh.

p28 The personality alone represents the permanent and unconditioned state. Personality is different from the individuality.

p36 One must seek the place whence there is no return and take refuge in the primordial purusha; the original impulse. The dweller in the vital center from the physical point of view is ether; from the psychic point of view it is the living soul. - See LaV and his SQK, the underlying strata of existence, which skience denies, but LaV proves it.

p38 The ether, the Tao, yin-yang, SQK, all descriptions of the same thing.

"It is today and it will be tomorrow and in all cycles or states of existence, such as it is, in itself, to all eternity." Survival forever. Not as human, but as whatever states we change into.

p46 Personality is permanent through all states of manifestation.

p52 Substance, essence. All manifested beings alike are subject to the general conditions which limit the states of existence in which they are placed.

p56 Certain extensions of the human individuality are already freed from time. !! ...may be reached through suppression of one or the other conditions that make up the corporeal world. - No more particulars about this unfortunately. Did Guenon himself achieve this? Or is he only stating what the doctrine says?

p62 Pure intellect is of a transcendent order and can claim knowledge of universal principles as its proper object; this knowledge is acquired directly and immediately by intellectual intuition. For Aristotle also.

p76 Diverse changes of condition and modes of existence are presented to the individual soul while dreaming, and in this state perceiving internal objects which belong to the domain of subtle manifestation. Diverse illusory forms are assumed by this same subtle being without in any respect altering it, since such forms are considered as purely accidental and not belonging to the being who assumes them, so that the latter must be regarded as unaffected by this merely apparent modification.

p91 In the dream state the individual produces through the action of its own desire alone, a world issuing entirely from itself, in which the objects consist of combinations of ideas clothed in subtle forms; secondary and accidental modifications.

p96 The psychic is in fact the subtle state.

p102 The 4 states: waking, dreaming, deep sleep, and that which is beyond.

p112 Posthumous evolution of the human being. Uh, the ultimate question I spose. Possible for a prolongation or indefinite prolongation of the human individuality in some cases; this would be in the subtle state. A passage of the being into the subtle form takes place at bodily death. Certain psychic or subtle elements can subsist without being dissociated from the individual, in some cases. - But what happens to them? Author is vague, maybe because the sources aren't (can't be) very specific.

p114 Birth and death are changes of state.

p123 The being is maintained for the whole duration of the cycle to which that state belongs - all humans are maintained then till the end of the human cycle. In the subtle state? Or the deep sleep state.

The being takes part in the final transformation which will be accomplished when the cycle is completed. Yikes well it sounds like according to this there is no gradual change at the end of the Kali Yuga, or reverse uptrend. It'll be a grand finale that wipes us out or transforms us or... Raises our vibration! Woo....

p126 The subtle form (at death) might not completely escape from time, but it does escape from space.

p127 The being may remain in the same individual condition in which it is attached to the subtle form until the outward dissolution of the manifested worlds, in other words the end of the cycle. From there it could either be Deliverance or going into the deep sleep state prior to returning to another cycle of manifestation (if one has not achieved perfection I guess).

p128 The subtle form is imperceptible to the senses, thus it does not affect the perception of those who are present when it separates from the body. Neither is it affected by combustion or any other treatment which the body may undergo after death.

p140 2 paths, one does not return to manifestation. As above. I guess almost everyone nowadays must return for another go in another cycle.

p141 No being of any kind can pass through the same state twice.

p156 Man can acquire true Divine Knowledge without observing the rites prescribed; the rites are mostly based on the science of rhythm and its correspondences in all the various orders.

p157 Deliverance is total and absolute Knowledge. Not feelings, sorry.

p162 The yogi having crossed the sea of passions is united with tranquility, having renounced those pleasures which are born of perishable external objects, he is calm and serene in the fullness of his own essence.

p173 He who has made the pilgrimage of his own self , a pilgrimage not concerned with situation, place, or time, which is everywhere, always in the immutability of the eternal present, procures a final deliverance from all disturbance or all modification; such a one is actionless, he knoweth all things and he attaineth eternal bliss.