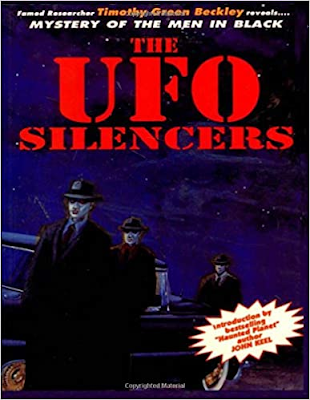 p11 Somewhat shaky account of the Maury Island affair off Tacoma, WA, where I happened to be born six years later. First of all it wasn't 3 lumberjacks who witnessed the saucer, it was the two boat operators (who may have been agents of the govt but I digress...). The supposed UFO didn't blow up, it was disabled and was ejecting pieces of slag from inside the center of the donut. Kenneth Arnold didn't just decide to go investigate, he was sent there and paid by Ray Palmer the pulp editor of Astounding, who wanted the story for his magazine. Author leaves out many interesting details of the puzzle, but I've covered this elsewhere... In reality nothing but a tall tale to cover up the dumping of something into the bay right there by Tacoma. Something that should still be there sitting on the bottom, if, ya know, someone thinks to go check, after all these years...

p15 Accounts of additional cases which, to be fair, seem to be perfectly accurate from what I remember of those accounts in other sources.

p20 Account of an MIB confiscating pieces of metal from a saucer; author says they are intent to take any physical evidence that might prove the existence of flying saucers. Actually I think they confiscate everything because the evidence will prove that all the flying saucers are manufactured here on good old Earth. As I've said many times, they are setting up the belief in saucers from space from a superior technology & the whole abduction thing as a cover for their own nefarious doings. Can't have a piece of evidence pointing to good old earth as the source, can we?

p27 Lies and false leads implanted in gullible earthly minds by the aliens... Uh, no, not by the aliens, but by our own govts, black ops, CIA/NSA, MK Ultra peeps, mind control, the Elites, the ICHC, whatever you want to call them. Hypnosis plays a big part in this foolery...

p28 Keel sets the record straight. "We have been misled into believing the extraterrestrial thesis."

p54 Greenfield's theory as of 1967, alternate reality, since there are inconsistencies in the interplanetary theory. Since AG is a practicing occultist he probably knows very well that these things are connected to the "wandering influences" but doesn't say anything about that, or about possible govt/shadow govt using or being used by them. So is he spreading disinfo then, at least as of '67. His book is way more revealing; this interview is somewhat dated and relatively pointless but maybe his book hadn't come out yet; but Beckley should have been aware of it while writing this present work. Eh who knows... This older stuff is hit and miss.

"Subjective viewing of an objective stimulus." What is the stimulus? Govt peeps beaming suggestions into your brain? Wandering influences?

p75 Yet another instance where regressive hypnosis is used to get the "abductee" to remember the abduction. Simple for her subconscious to have made it all up on the fly, based on expectations of herself, the hypnotist and the rest. Implanted fake memories. Covering up a real abduction by someone else; a milab, as they say.