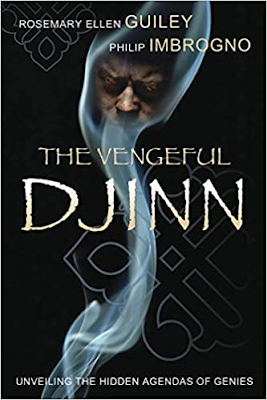 Anglicized to Genies of course. No, not Barbara Eden or Will Smith. "The truth about a race of beings that you thought only existed in your imagination and your nightmares" - and movies and tv, don't forget those.

p16 Iblis & others are the fallen angels, they were supposed to bow down before Adam and refused. Djinn came before man. Iblis is supposed to be the angel Azazel.

p22 Iron can weaken or repel supernatural entities. Withering power of iron tools. Iron at the time of Solomon was pure: magnetite. If djinn are composed of plasma, which can be affected by magnetic fields, the magnetic energy might have been harmful to them. - So does this mean the shape-changer alien in X-Files who was finally destroyed in one of those shitty season 9 episodes was really a fairy? No wonder he liked Mulder... wait, I mean a jinn. or maybe he was an elf. An ugly one...

p34 The US military was trying to capture a djinn in Saudi Arabia in 1995; had been for many years. From unverified testimony of a Saudi prince to a friend of one of the authors. The US was after a technological device that allowed djinn to pass through walls and through dimensional windows. - Hmm, would djinn need a device to do that? If they're plasma then I don't think so. Disinformation? Materialist attitudes demanding a material explanation for everything even when it doesn't make sense?

Similar incident in Pine Bush NY. Military "training exercises." Operation undertaken by a special unit to capture an inter-dimensional alien using a portal in that area of the country to enter and leave our world. Main objective is to capture its technology. - Just a disinformation story? Possibly. Genies shouldn't have technology as we understand it. They would be the "wandering influences" mentioned in ancient traditions, yes? Keel's "ancient adversary." Booted off earth to make room for man; and they want it back. If...they exist as independent beings. Guenon didn't seem to think so, but then he regarded angels, demons and the devil as actual existing beings. His traditional doctrines allow for the possible existence of non-human or non-corporeal beings. But apparently the ancient Hindus never figured out what they were; or if they did or if Guenon figured it out from what they wrote, he isn't telling, because he knew peeps who would take advantage of the info. He's very guarded in some of his writings.

p36 Modern holy man in Arabia says Allah created 3 types of beings: angels, djinn, humans. Angel/jinn wars. Some of these latter were quarantined in certain places, which the authors speculate is why some areas of earth are haunted. Most jinn were banished outside the physical universe. The wandering influences, who would be trying to get back in. & those practicing magic & evoking entities & channeling entities or "aliens" would be doing precisely that; letting them back in & f'ing up the world in the process. The quarantine areas would be Keel's window areas.

p75 Jinn can manipulate matter by changing vibrations of strings - I guess string theory was still popular when this book was written heh. Anyhow changing the properties of matter. Individual vibrations determine the type of particles and matter formed. Now if you combine this with LaV's SQK you have jinn influencing the very formation of the physical world. Not via strings which don't exist but via sub quantum particles that continually interact; continuous creation. Methinks this is what the US military is after, that they think the jinn are capable of doing; the ability to influence the creation of matter.

p136 Jinn can vanish into thin air, materialize, pass through walls etc. - This sounds like the MIB who visited Bender & Keel. Did Keel know what they were? He had traveled in the middle east (Jadoo etc). He never wrote about it specifically.

p144 Jinn and fairies can possess people, they are weakened by iron (authors speculate because human blood contains iron - hmm, wouldn't this argue against possession then? Would they possess humans with iron in their blood if iron weakens them? Or would they become trapped? Hmm... authors don't say anything about it). Iron weapons and tools hold sympathetic magic of life force. Greeks and Romans would not allow iron in their temples or rituals, in order to not disturb the dead. Fairies told Robert Kirk about their weakness to iron... I have his book, gots to read it soon, didn't realize he spoke to them personally (supposedly). He's the guy who died on a fairy mound or what evs...

p169 Guy named Martin (Martin Martin!) buys home in Holmes NY which turns out to be haunted, describes his nighttime visitations including one by lizard people who change to smoke and back. Portal area? Reptilians and jinn are the same? Apparently... If any of it really happened anyhoo. Fascinating account nevertheless.

p182 Electromagnetic interference - disrupt the ability of shadow people to maintain a form in our world. Mobile phones are killing off ghosts. Haunted tourist attractions in Britain could be under threat; from electronic noise. Account of a shadow man showing up at a salvage company; apparently all the employees saw it. They were salvaging computers and pieces of cell phone towers. It seemed to be most interested in the latter. Someone brought in a crucifix & it went away.

p189 Skinwalker Ranch. It violates skinwalker pathways. Tells of some of the phenomena.

p222 The obligatory Crowley reference, as per usual. Lam, Aiwass & all those guys. Him opening a portal through which all these things are appearing & fucking with us. As if no portals existed before his meddling... Bologna. Really jinn? Infiltrating occult circles? Controlling them? Are they more than just wandering influences?

p223 EVP - electronic voice phenomena. You can use a ghost box, axe questions, then play the recording back & get answers. There's a book Ghost Box but I didn't think it had much valuable info, more of a travelogue of visits to haunted houses.

p227 Conversation with "jinn" using MiniBox. At some stone chamber in upstate NY. Hmm, never heard of these; sources of paranormal phenomena apparently.

"Who built this chamber?"

"Do you come through the chamber?"

"Who is here besides demons?"

"Is anyone here besides djinn?"

"Give us more information."

p233 A section on how to deal with and get rid of them.

To me this could all come under the same umbrella that Guenon describes, the medium producing something out of his subconscious that these wandering influences then use; psychic remnants; probably tons of remnants in an old stone underground chamber. Because the authors believe in jinn, they end up interviewing a jinn. If this had taken place in the middle ages, would they be interviewing a dwarf or elf? The Sumerians would be talking to Enki. Subconscious = negative influences. Super-conscious = positive influences. So any encounter of this type with a disembodied whatever must be negative by definition. We should be trying to reach the super-conscious, not the sub...