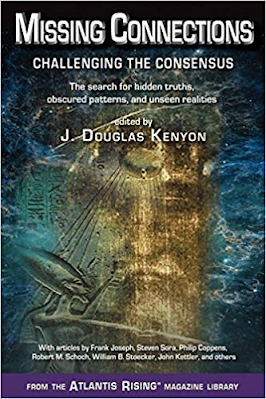 p22 Speaking freely had its price. Referring to the times of Elizabeth 1 where she had one dude beheaded and another drawn and quartered. Ditto above tho nowadays you're just censured by social media; so far anyways...

p30 1909 discovery in Grand Canyon of necropolis with tombs and mummies. Some question about the identity of the discoverers, whether they worked for the Smithsonian. Did the Smithsonian bury this story and hide the evidence?

1990 discovery of intricate passages and rooms at Casa Malpais, modified by the Mogollon culture into underground tombs.

p33 Seth Tanner supposedly finds a "cave containing sacred religious treasures of the Hopi tribe which no white man was allowed to see." He was blinded by them. Somewhere in Grand Canyon area.

p79 Bacon taught that concepts cannot be taken as fact, that what we thought always had to be updated by what we found out. Newton running counter to Bacon thought that theories could be proved, that ideas could be demonstrated to be fact. Mainstream media & skience then is Newtonian. I agree with Bacon. For instance, to use my favorite dogma as a whipping post, if you think humans are causing global warming and then discover that Mars is also warming at the same time at the same rate, as is another planet or moon further out in the Saturn/Jupiter area (I read about it quite awhile ago but don't remember which moon - data from Cassini maybe); but anyways, after finding that out don't you have to at least question the mainstream global warming dogma?

p178 Roswell. Affidavit from witness Haut who saw the "bodies" under a tarp with big heads protruding. The craft had no windows, like an egg. - It's all a hoax I tells ya. A hoax by the govt. The craft was a test flight of a US made un-manned vehicle that was probably deliberately crashed to set up the whole ET scam. The bodies probably did exist but were dummies (not costumes worn by pilots as in X-Files). Or it crashed by accident and the bodies were placed there by the first peeps on the scene, so they could be seen & the rumors started. Corso's testimony has holes in it  (see a previous entry), & of course we have the alleged Carbide materials alluded to by Colvin. Any supposed advanced tech from the "alien craft" could have been developed in secret by the US govt, they use this as an excuse to bring this stuff out into public (the transistor, Velcro, whatever else) & say it's alien technology, to get an advantage in the Cold War.

The earlier article about the alleged saucer crash in Italy in 1933 is a bit more puzzling but could have been the same type of disinfo campaign, since all the "evidence" was destroyed in a fire.

p182 Memory metal, shape-memory alloys. Supposedly from the crashed saucer but most likely already developed in secret by the US (Carbide) and/or other govts (at least 20 years ahead of what the public has etc etc). William Brazel: "...like a plastic of some sort..." Plastic = Union Carbide. Sponges have sprung back to their original shape forever. So this memory metal would be metal sponges. ?? Plastic sponges? The flying saucer evidence always disappears (other than some witness testimony which may or may not be reliable/exaggerated) because it could in all probability be identified as having been manufactured right here on good old earth; which is what they don't want us to know.

p217 Constantine X coin found in Wisconsin. He died in 1067. Found 9 feet down. Dismissed by the experts because they did not find it; an amateur did.

p233 North American Indians modified the natural environment, sometimes burning wooded areas to create more grassland for deer and other game animals. Shh, don't tell anyone, we're supposed to let our forests manage themselves as if humans didn't exist. That's why they're all burning down; bad forestry management. No all the massive forest fires are not because of global warming, they are causing global warming. They generate intense heat, which, uh, y'know, warms us up. Just like the constantly rising record heat in Phoenix. Global warming? How about the temps going up in pace with the population going up and all their air conditioners blowing out hot air 24/7 because that's the only way you can survive in that heat. Logical?