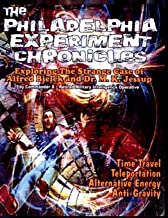 Are these people delusional? Had a story planted through regressive hypnosis to cover up something they knew? So some of what they say may be true, but most of it will be disinformation? Or all of it? I bought used & got an older copy with a different cover. Oh well you takes your chances. Same content though, pub 1994.

p67 Roswell. Same old story from Al Bielek (which I believe he believes). Dead aliens looked more like locusts. Others say they looked like greys. I think they were crash test dummies, planted after the fact to spread belief in ET's that don't exist.

Time locks. We are locked into one time span at the moment of conception. When you die you are free to incarnate elsewhere. - Nah I don't think so. Reincarnation probably doesn't happen as I've splained elsewhere.

p68 Phil. Experiment. They used 4 huge Tesla coils. Another description of what happened to the men similar to Allende's. Fiction?

p77 The Torus of Time - time and space curve back on themselves. - I don't think so. I don't think time exists other than as a measurement invented by us humans to stupefy ourselves. The universe of sub-quantum ether is just there, always has been and always will be. Matter comes into existence & then decays & returns to the ether.

p79 Bielek says Phil. Exp. & Montauk locked in and opened up a 40 year hole in hyperspace which is when the grays staged a mass invasion from whatever alternate reality they're from. The entire project (Phoenix Project) was generated for this specific purpose. - Hard to believe? You bet your sweet bippy it is. Where is one shred of physical evidence of aliens after all these decades? There isn't any? Gee, I wonder why...

p84 1992 interview with Bielek, says Tesla was in charge of Project Rainbow (Phil Exp) until March 1942 when he detuned the first manned operation because he was sensitive to the personnel & knew it wasn't ready, so it failed & he was removed & dead 10 months later.

Central rotating electromagnetic field in one of the gun turrets, at a critical frequency to interact with the 2nd time vector. (?) It rotated the position of the time field in relation to the ship, which is what made it disappear. Okay...

Too much power for humans to stand; 20 megawatts of pulse power at 75 feet. Heatimo Effect. (?)  Effect on neural brain resonance, made the people sick. This part is understandable, though splained ambiguously as all this stuff is.

Aug 12 1943 test they turned down the power, sailors merged with the ship etc ala X-Files Dreamland episode, equipment couldn't be turned off so Bielek & his brother jumped off the ship & landed in 1983 for 12 hours. Okay... where they were told the Phil. Exp. & Phoenix Project had become locked in a hyperspace bubble. They were sent back (placed in a time tunnel(! - he says nonchalantly)) to destroy the equipment & saw peeps on fire etc.

p89 Physical age regression, from 75 years old to 55 or less. US/alien technology. Uh-huh. Why don't some of these NWO'ers like Bush & Clinton & Carter & Pelosi & Biden use it then? Or the Queen Mother? Or are they using it or something similar which is why they all live to be 100?

p90 Aliens involved in experiments - now you've lost me - Orion Confederation, Leverons, grays, & groups from Sirius A & Antares. Sirius A = Oannes? The aquamen? Orion guys are reptilians. - Flimsy on the details, interviewer doesn't follow up, doesn't want to poke holes in the story, too much detail would make the contradictions multiply like wildfire...

p93 Newspaper article about invisibility paint. From 1938 or 39. Chemist Max Gardner. He notified the War Department. It made stuff invisible from 100 feet away. This is the 4th mention of pre-WW2 invisibility projects that I've come across in old UFO books, all publicly mentioned or demonstrated. Wild. What happened to this technology? Why no follow-up? Classified, for sure, but why no follow-up in the media? No interest? Seriously? Because they're in on it people.

p103 By using 425-450mhz radio frequency power, the human mind can be manipulated and controlled. - I'm not sure that's the right frequency range, but the concept is more than likely correct. VLF maybe.

p115 Communication from the other side by someone they think is Jessup - well no, the dead don't speak in seances, it's the temporary form of the "wandering influence" prompted by the subconscious of the medium & participants. Sounds Adamski-like unfortunately. Or Derenberger. This is stuff any of those present could have contributed to the speaking entity. Thinking it was Jessup seems like kind of a stretch...