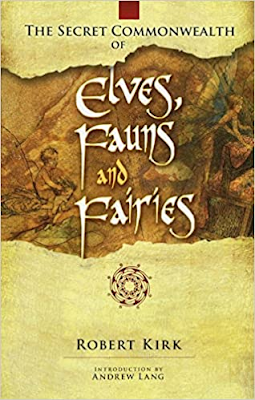 I'm not sure why they call this a book since the author's contribution is only 40 pages or so. The first half is intro, & there's 10 pages of notes at the end.

p14 Kirk swooned on a fairy hill. There aren't any ashes in his grave. He "appeared" at his son's baptism, having given instructions on how to return him to society; he was a captive in fairyland. Those instructions (throwing a knife over his head) weren't carried out. - The knife would presumably have been iron, fairies supposedly don't like iron because it can be injurious to them, so maybe that would have "broken the spell" and allowed him to return. If any of this actually happened... At the time they believed it, and saw him appear in the church...

p16 Whatever hallucination or illusion or imposture or the subliminal self can do today, has always been done among peoples in every degree of civilization.

p17 If there's an element of fact in modern hypnotic experiments, it is plain that old magic and witchcraft are not mere illusions. The subliminal self has his stroke in these affairs. - Again corroboration of Guenon about hypnotism. From 1893. Around the time RG was born; he might have been familiar with this work.

p24 Their speech is a kind of whistling, like the cry of bats. - Possibly worth noting is the high-pitched whistle or buzzing you might hear in either ear. Hearing it in the left ear is supposed to be bad, in the right ear good. I've heard both many times, sometimes when sound in general will reduce in volume when the whine is heard; but not always. A sherpa in Nepal at Mt Everest base camp heard that whine in his left ear whilst working on fixing the path through the Khumbu icefall for the climbers that spring, and hightailed it out of there, barely escaping before the earthquake hit. Some of his friends weren't so lucky. Now is this siths or fairies, or a defect of the ear? I do have ear issues, they don't drain easily & I can get dizzy spells when my sinuses clog. Maybe that's it. Maybe not... There it goes in my left ear as I re-read the following paragraph...

p27 Traditional form of imposture wrought either by conscious agents or unconsciously and automatically by persons under the influence of somnambulism (hypnotism). Or an unknown force of nature.

Scotch-Irish in Scotland with second sight could see these beings (this is written in 1691). Of a middle nature betwixt man and angel, light changeable bodies similar to a condensed cloud, best seen in twilight. Bodies so pliable they can make them appear and disappear at pleasure.

p49 The Scotch-Irish seers have seen a double called the reflex-man or co-walker. If invited and earnestly required, they can make themselves known. Tghis double is of a living person though.

It is one of their tenets that nothing perishes, everything goes in a circle, lesser or greater (spiraling vortex or whirlwind?), and is renewed and refreshed in its revolutions.

Every body in the creation moves, nothing moves but has another animal moving on it, and so on to the utmost minutist corpuscle. The different states of being? Or germs, atoms etc.?

They disappear whenever they hear the name of Jesus. Well well, similar to "alien abductions" where the grays also hightail it when someone calls on Jesus for protection. They're the same critters folks! They've always been here; they're not from outer space. They cannot act after hearing His name. Same as the "grays."

p53 Continual sadness because of their pendulous state; silent and sullen. Uncertain what will become of them at the last revolution when they are locked up in an unchangeable condition.

Differing opinions on what they are. Departed souls clothed in an ethereal vehicle to hold them & keep from being scattered; some sleep in an unactive state until they assume terrestrial form again. - Here's a mention of reincarnation in 1691, but only the belief of some of the seers, not all. The low country Scot calls them a wraith, exuvious fumes of a man exhaled and congealed into a various likeness, called astral body, neither soul or counterfeiting spirit. Others say they are a people by themselves. - This "fumes" corroborates Guenon again, with his "psychic remnants" that linger after death, possibly the "wandering influences" that can be harnessed by peeps, or given temporary existence by mediums and hypnotists.

p63 Second sight is of no long duration, only continuing so long as they can keep their eye steady without twinkling (blinking I presume). They never see the species of any person who is already dead. They will ordinarily see their absent friends (still living).

p69 When transported to other countries (especially America) the seers lose this quality.

p87 Their speech is a kind of whistling, twittering or chirping, a very widely diffused and ancient belief; see Homer or a Professor Alexander about some manifestations in Rio that were frequent.